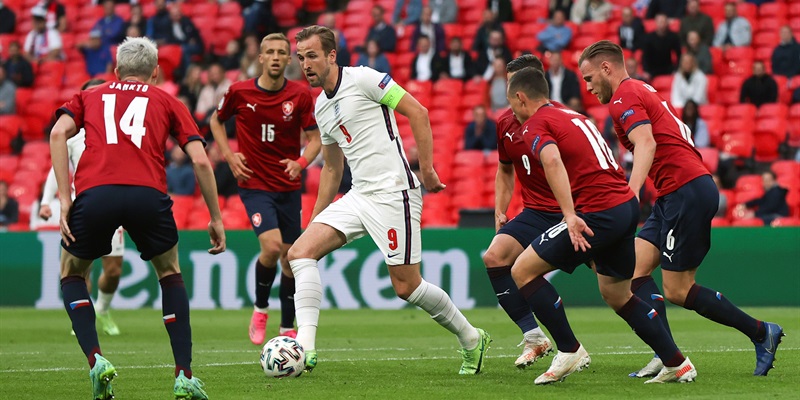 In this third in a series of three blogs, Chris Sulley, The FA’s youth coach developer continues to concentrate on modern trends of defending. This time with a focus on pressing in different areas of the pitch.

As we discussed in the last blog more teams are trying to build and create their attacks from their own defensive third. Part of that strategy has seen the emergence of central strikers who are prepared to drop ten or 15 yards into their own half to try and present a problem for the opposition’s central defenders.

This type of striker has been labeled a ‘false nine’ and we see players like Harry Kane and Kai Havertz as exponents of this role within the modern game.

This performance problem is more frequently being addressed by central defenders who are prepared to follow the striker into this deeper position and press them.

Why has this strategy emerged?

It has become apparent that teams try to overload the number of players in their own half. This is to make it more efficient and safer to play a shorter passing game to penetrate the opposition and advance up the pitch. By marking the ‘false nine’, it also makes the numerical advantage less or even and therefore they are more likely to win the ball back.

This strategy can discourage passes into the ‘false nine’ and send the opposition into pre-arranged traps or away into wide areas as discussed in the previous blog. It also offers the chance of counter-attacking from central areas which suggests a greater chance of a goal-scoring opportunity.

We need to be aware of the trade-offs of this strategy.

It can leave big gaps in the defensive line that could be exploited by runners from wide areas or central players rotating with the ‘false nine’. Therefore, it requires teammates to track those runners.

It may also leave team-mates having to deal with 1v1 situations that are high risk if the attacker is going for a goal, as any foul could lead to a red card decision.

So, what do our modern central defenders need to be capable of if a coach is to use this strategy?

But once the decision is made to mark tightly the central defender needs their timing to be spot on to prevent the ‘false nine’ from turning and force them backwards or sideways. This will require good agility and changes in pace.

Because this strategy is going to expose them and other teammates to 1v1 situations they need to be willing to take on that responsibility and be able to defend with determination and skill.

When designing practices consideration needs to be given to providing enough space behind the central defender to replicate the possible dangers we have touched on. This will help to develop their decision-making, 1v1 defending, and athletic capabilities.

And finally, encourage and praise players to be selfless and understand the purpose of this strategy and the potential rewards it can bring.

We hope you have enjoyed this mini-series of blogs on a subject that is dear to me and essential for any team to be successful.

If you have any questions or comments, please post them in the comments box below.