When, where and how to share the ball
Click here to join the England Football Learning group and chat with other members
Related
Recommended 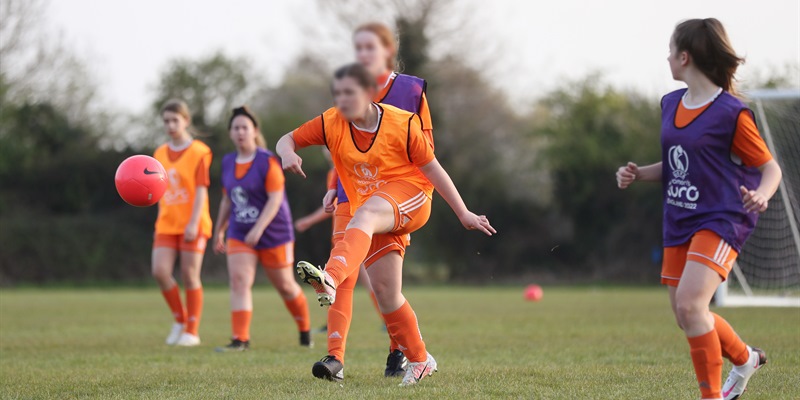 In this blog, Mark Leigh, The FA’s coach development officer, discusses how best to develop players aged 5-11 so that they can meet their full potential.

Recently, I was watching a game where I saw a sublime piece of skill from an under eleven. Upon receiving the ball, he executed a step-over turn followed by a drag back to cleverly evade two opponents before his attempted one-two was deflected for a throw in. My inner joy at witnessing this skilful cameo was however short lived as he was shouted at by coaches, parents and teammates alike with a variety of well-worn phrases with which we are all too familiar, such as ‘get rid of it’, ‘play it simple’, and my personal favourite ‘don’t try to be too clever’.

I’ve no idea who the player was but the experience has stayed with me. I frequently reflect on this incident from the perspective of the coach, the player and the development of the game.

The coach was likely brought up on a diet of long ball football in the 1970’s and 80’s where, transferring the ball as quickly as possible from back to front was paramount. This cultural legacy casts a long shadow as the coach like most of us is a product of his experience which is then passed onto the next generation.

From the player’s perspective, I often wonder how he felt at this moment. He was likely robbed of the joy of trying something new, of testing his boundaries and demonstrating skilful performance appropriate to the game situation. Did he continue in this way of playing or succumb to the pressure?

A low-risk playing philosophy solves the immediate problem that we might lose the ball in a ‘dangerous’ area but a longer-term view of player development should consider what we lose by playing this way. Goalkeepers and defenders forgo technical and movement skills as they learn to play out from the back. Midfielders fail to learn timing and creative movement, ball reception, passing combinations and decision-making skills. Full backs don’t persist in supporting attacks via well timed overlaps,  1v1 duels in attacking areas and delivering crosses (passes) into dangerous areas. Forwards not learning intelligent movement and combination play.

So, if we wish to promote a more skilful playing style, what type of practices should we offer and what does this look and feel like for the developing child?

We know that young children are creative, energetic, self-centred often impulsive, but also excellent experimenters and learners. As such, asking them to share the ball and play it simple is counter-productive during the development years. Instead, we should strive to promote small-sided activities that offer lots of ball contacts, movement and activity. Clever use of the STEP principle (Space, Task, Equipment, Players) (Youth Sports Trust, 2022) to provide appropriate underload/overload games which match the challenge to the skill level of the player and give players freedom to experiment and make their own decisions. Directional practices are important as it places the activity in context of the game and allows us to promote skilful forward play and penetrating attacks.

Use of language such as ‘look forward, play forward’, ‘invade the castle’ (opponents penalty area) or play like Messi or Miedema give young players clear pictures in their mind that they can attempt to recreate on the pitch. ‘Only pass when you hit a brick wall’ (i.e., can’t go forward on your own)  is a phrase I heard QPR Head of Coaching Chris Ramsey use which perfectly communicates the focus on the individual retaining possession and combining with others when necessary. Similarly asking the team to ‘try to give the ball back to the player who passed to you’ will not discourage players from passing when appropriate as they know there’s a good chance they’ll get it back.

So, in summary, I would encourage coaches to adopt a long-term view of player development focussed less on passing and team play at the foundation phase. Instead recognize the uniqueness of each individual and appreciate the effectiveness of dribbling, turning and screening as alternative ways of retaining possession and penetrating (even if like me you couldn’t do it as a player). After all, one thing that most of the best players in the world have in common is the ability to beat an opponent 1v1 and at the highest levels of the game this is priceless.  As priceless in fact as the inner joy I felt when I saw that under 11 perform that step over.

Are there other tactics you use to develop your players in the foundation phase? If so let us know in the comments below.