How to develop challenging 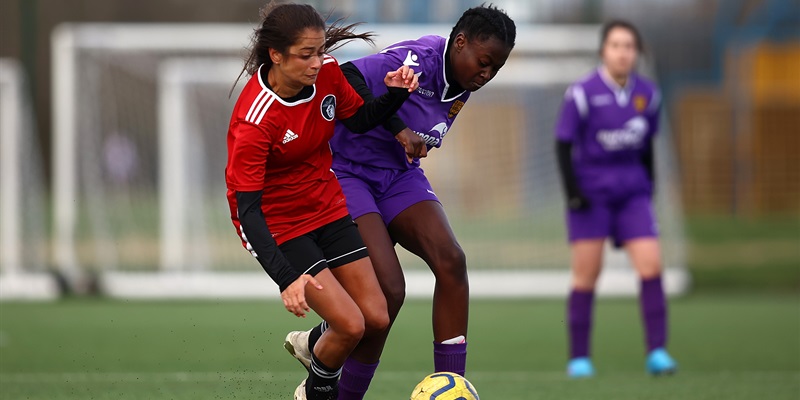 In this blog, Suey Smith, The FA’s coach developer, talks about challenging and what you could do to help your players with it.

Challenging is often used to win possession or defend the goal. And it is one of those areas, we as coaches, often avoid. Possibly because we aren’t sure how to coach, my look an aggressive topic to coach to those watching it or are scared that we could cause our players to get injured.

Being honest, I don’t think I have ever coached a challenging session. But it is something we need to help our players with. So, how can we support our players to learn this art?

Integrating it with 1v1 defending springs to mind. With a key focus on the technical points:

Though I think there is more to it. Our players need to make decisions about how to control their body, time the challenge and when to commit. They also need to recognise when best to challenge by noticing key triggers such as a heavy touch. But they also need to think about the risk of the committing too early. So, there is quite a lot to it.

A good way to introduce challenging is playing the game of futsal.

Futsal has accumulated fouls where each team will be allowed to give away five direct free kicks in each half, then on the sixth foul a direct kick is awarded to the opposing team. Not just that but slide tackles are not allowed in Futsal but players ARE allowed to slide on the court, for example to stop the ball from going out of play. So, it could be an effective way to get them used to sliding.

During the game, players may start to ask themselves “Can I win the ball? Or would this result in a foul and potentially our fifth foul?” which can help them to assess risk v reward and how to time a challenge. This is something coaches can get players to think about before challenging.

The reduced playing area also increases the need for skill, cognitive development and quick-thinking. You could fit nine full size futsal courts within one football pitch despite and have less than half the amount of players. So you can start to see how lively and fast the game is played at, which makes challenges and 1v1s inevitable.

If futsal is not an option, try a smaller area, smaller pitches, smaller numbers so the players have more opportunity to challenge for the ball.

Futsal has a perception of being about flicks and tricks, but the game is very much possession based with limited players on the pitch at anyone time. It is important all players can defend to make challenges so coaching this at youth level is extremely important.

I hope this is useful and I would love to hear how you work on challenging with your players? Are there any specific smaller sided games you use? Let us know in the comments below.