Formats of play: getting effective outcomes from your session 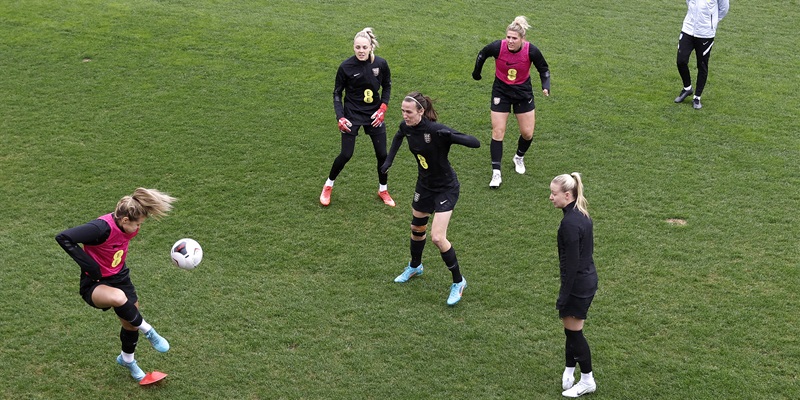 In this blog, Jodie Whitford-Stark, coach development officer for the FA Women’s High-Performance Football Centre at St Marys University talks about different formats of play and their outcomes.

The training sessions we deliver to our players have to prepare them to play in matches. But, we also need to prepare our players for their own long-term personal development. So, just because we play 9 v 9 on a game day, it doesn’t mean we always have to play the same format in training. This blog will give you some ideas as to what format of play you could choose to get the outcome that you’re after.

Let’s use 11 v 11 as an example. Players as young as 12 years old may be playing this format of the game on a match day. We know that in the WSL for the 20/21 season, on average, a striker received the ball only 19 times (which is the lowest per position). The highest average number of times the ball was received was 34. This was by CBs. Therefore, if we only did 11 v 11 games in training, the players may get less than 20 touches per session; which isn’t good for their technical development.

So, if we’re going to support long-term player development, we need to give players lots more quality opportunities with the ball and exposure to scenarios that may happen in a game. I have used the phrase ‘quality opportunities’ as lots of repetitions alone may not improve performance, especially if we are repeating something continuously poorly. Instead, we need to think about which learning intervention strategy we use to support this. This may be: Q&A, trial and error, guided discovery or observation and feedback etc. And, I have used the phrase ‘exposure to scenarios which may happen in a game’ because practises have to resemble the game by using pitch geography, realistic movements and tactical concepts. Smaller-sided games and practices in training can help us with this.

For example, I coach a U11 team currently who train twice a week. On Monday, we played a 9 v 9 fixture. So, for training on Tuesday, I wanted the players to get more touches on the ball. We started with a 1 v 1 type game, then we went into a 2 v 2/4 v 2 practice, and then finished with a 4 v 4 match. I had 12 players, so whilst this game was going on the players played 1 v 1s independently.

What I have to consider is the physical demands of these practices and what outcome I’m looking for. If I have a 2 v 2, do I want a big pitch for lots of aerobic running and lots of space for them to dribble with the ball? Or, do I want a smaller pitch so there is more high-speed-running (sprints/anaerobic) and they have to be better at manipulating the ball? The way I deliver the practise can impact this too – e.g. how does the game restart? Do I quickly play the ball in to keep the intensity high and see how they react in transition? Or do they recover back into a shape for a breather and than the game starts again. These constraints will impact the out-of-possession outcomes as well.

When we look at formats of play, they don’t always have to be balanced. I like to use overload vs underload games to encourage the players to problem solve. For example, what do they have to prioritise if they’re underloaded out of possession – the goal, the space or the player? For the players with the ball in possession – they should get more repetitions to manipulate the ball with real pressure but not too much. I often use small practices e.g. 3 v 1, 4 v 2, 5 v 3 – 7 v 4 – and I can change the balance based on the needs of the group – do they need it easier or more difficult?

Another benefit of unbalanced small-sided practices are they challenge the players to make decisions rather than the coach telling them. If the practice design resembles a moment in the game, albeit on a smaller scale, the players are getting lots of touches on the ball, or involved in lots of phases of play (e.g. practicing lots of out of possession skills). And, the tactical concepts of the game from an attacking or defending perspective can scale up to a match with more players. As a coach, my job is to educate and support them in the decisions that they make. And, I consider my language and tone of voice to support these outcomes too.

By playing smaller-sided games and practices in training, the players may get more touches on the ball or be involved in more phases of play. Therefore, they may have greater game understanding as well as better technical competencies to apply in bigger formatted games. If we design sessions effectively, then the players can still understand the tactical concepts of the game in smaller formats and apply these to bigger formats. And, when we choose a format of play, we may support learning by choose balanced and unbalanced formats.

How do you use different game formats to help your players?