What do coaches and players in the female game think effective coaching is?
Click here to join the England Football Learning group and chat with other members
OPTIONS
RELATED

What do coaches and players in the female game think effective coaching is?

The FA women’s coach development team worked with St Mary’s University to investigate what coaches and players in the female game think effective coaching is.

One of the key questions explored was:

"How do players and coaches across different tiers of women’s and girls’ football (from grassroots to Barclays FA WSL) describe their experiences and expectations of effective coaching?"

In this blog, we will share how St Mary’s University engaged with coaches and players in the female game to understand this question. We will also look at one of the headline findings and relate this back to our own coaching practice.

How was the question explored?

The research, led by Dr. Abbe Brady, was conducted between November 2018 and September 2019. There were 24 action research workshops and 63 focus groups which took place. The methods of data collection were focus groups within a workshop event as well as written artifacts (i.e. lists, tables, scenario responses) produced during the workshop.

The total number of participants was 276 comprised of 236 players and 40 coaches (21 male, 19 female). Table one shows this in more detail.

Table one - shows a break down of workshops, focus groups, players and coaches.

Effective coaching in the women’s and girls’ game is characterised by core qualities of transformational leadership.

Finding number two was based on the transformational leadership theory (TFL) which has recently been applied to sports coaching.

Table two - shows some transformational coach behaviours and individual characteristics of a coach.

Transformational coaching in women’s and girls’ football can be understood slightly differently from the original TFL model. 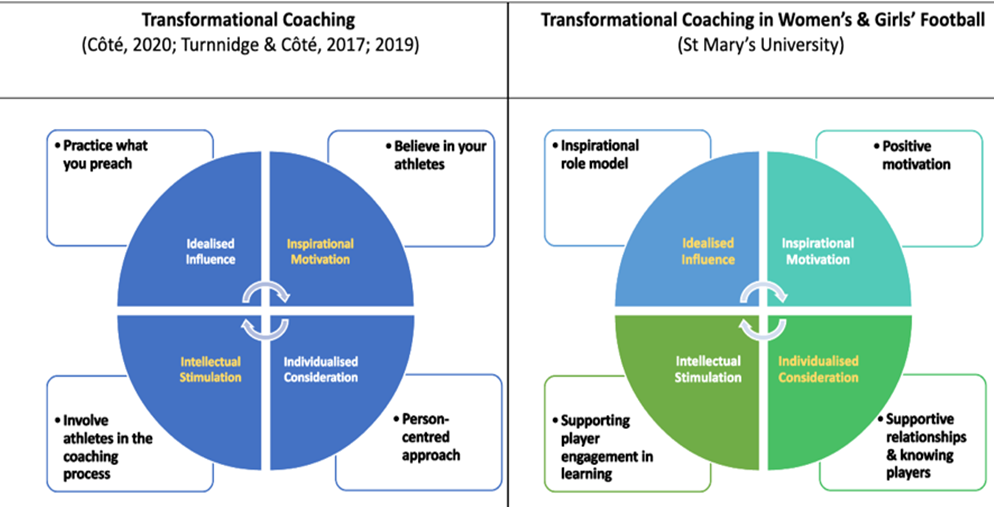 If you are coaching women and girls’ football, it will be helpful to become familiar with what transformational leadership is, and how this looks in action. Table two can help with this and it might be useful as a framework to reflect on your own coaching practice.

Importantly, every player and coaching context is different. Therefore, at times your coaching behaviours may look different from what is described in table two.

Start by being clear on your personal values, and how these transpire in your everyday behaviours, in football and away from football. This will help you to become more aware of your coaching behaviours.

Below are some questions to consider:

We would love to know your answers to them. Please comment below.