Nico Schlotterbeck: The heart of the German U21 defence
Click here to join the England Football Learning group and chat with other members
OPTIONS
RELATED

Nico Schlotterbeck: The heart of the German U21 defence 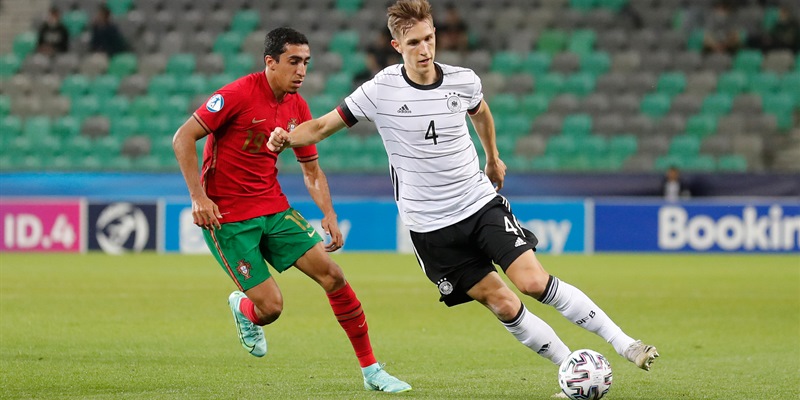 In this blog, Katie Sorenson, The FA’s game insight analyst talks about a rising star, Nico Schlotterbeck and key parts of his journey so far.

After a breakthrough season in the Bundesliga, Schlotterbeck continued that promise with his performances during the competition for the Germany U21 team. He was one of six German players to be named in the squad of 23 ‘UEFA U21 2020 Squad of the Tournament’ selected by the UEFA technical observers after an excellent run of form at the heart of the German defence.

Despite his recent successes internationally, Schlotterbeck was a bit of a late bloomer on the international stage. He did not make his youth international debut for Germany until he was called up to the U18 squad in 2017. Comparatively, other members of the U21 Euro squad had represented Germany since the U15 age group, the earliest age group at which you can represent your country. This may be due to his rise through smaller youth systems.
Having come through the youth system at VfR Aalen (4th tier of German football) and then Karlsruher SC (2nd tier of German football), Schlotterbeck made the move across to Bundesliga outfit SC Freiberg in 2017, before his first call up internationally. He made his senior debut for SC Freiburg II (4th division) during the 2018/19 season, gaining some valuable senior football experience, before making his debut in March 2019 towards the end of the 18/19 season for the first team in the Bundesliga in a 2-1 home win against Hertha BSC as a second half substitute.

After only starting four Bundesliga games during the 2019/20 season for Freiburg, the decision was made prior to the start of the 2020/21 season for Schlotterbeck to be loaned out for some more game time. His decision to go out to Union Berlin on loan, may have been influenced by his older brother, Keven (24), who himself is a professional footballer. "My brother told me a lot about Union, and after what he said, I'm really excited about the club and its fans. I'm looking forward to the season at Union and hope to be able to play in front of an audience there soon." Further to this, Union Berlin director Oliver Ruhnert felt this move would benefit both the player and the team, saying, "with Nico Schlotterbeck we have a young, highly talented defender who has already proven his great potential in the Bundesliga. With his way of playing football, he should make our game more variable and personally take the next step in his development."

Another influence on Schlotterbeck’s development as a professional footballer was his uncle, Niels Schlotterbeck, a midfielder, who himself played for Freiburg during the early 90s. Having these two role models in Nico’s life, must certainly have had a positive impact on his development, and ensured he pushed himself even further to become a successful footballer, like that of his two relatives. The history of his family members representing this Bundesliga club could also play a big part in Schlotterbeck wanting to be a success there.

After making 16 appearances for Union Berlin last season and playing in all of Germany U21 Euros games as they won the tournament, we look forward to seeing if he can make himself a mainstay in the Freiberg back line this season.

During the U21 summer tournament, Schlotterbeck was a real dominant figure in both boxes. He posed a great attacking aerial threat, and was an obvious target from set pieces, nearly scoring a wondergoal volley against the Netherlands in their group stage game following a corner, stopped only by an equally good save by the Dutch keeper. His threat in these areas is highlighted by his 10 touches in the oppositions box, the 2nd most for a central defender at the tournament. Schlotterbeck won 20 of the 28 aerial duels he competed in. This 20 was the highest for a central defender who had played 2 or more games in the tournament, which highlights his strong, aggressive nature to win the ball. His 71% success rate was well above the average of 62% for a centre back. This highlights his very good positioning and anticipation in order to win these aerial duels.

Schlotterbeck did not just display excellent aerial skills during the tournament, he also demonstrated a fantastic passing range and confidence on the ball in build-up. This conviction allowed him to step into midfield on the ball to entice the opposition before making his pass. This travelling on the ball meant we was able to commit opposition players, freeing up his teammates to receive the ball. He showed a great ability to switch play, often looking to hit the diagonal across to the wingers.
Schlotterbeck had the 5th highest amount of touches per 90 for a central defender during the tournament (96 per 90), which demonstrates his usefulness in possession. Further demonstrated with the high number of passes he attempted per 90 – the 5th highest for a CB, as well as the number of forward passes he made across the tournament (the 4th highest for a CB).

Schlotterbeck is a great example of a technically gifted ball playing centre back who also shows great physicality when competing in the air. To help develop your own players like this, ensure that you:

Here are some questions for you to consider.