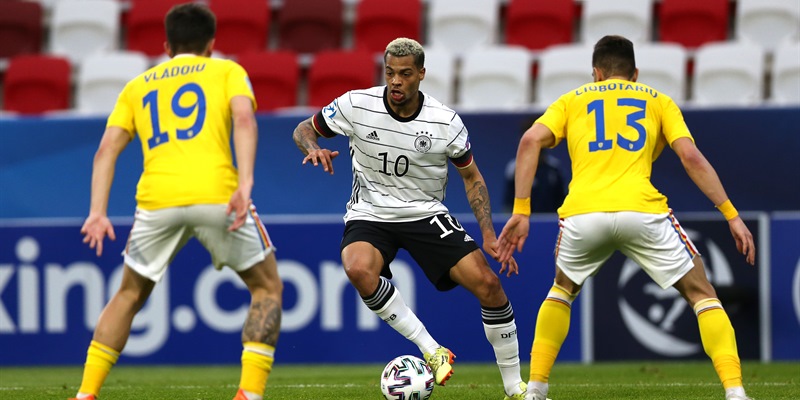 In this blog, Katie Sorenson, The FA’s game insight analyst and Paul Holder, The FA’s youth coach developer, talk about the up-and-coming talent Lukas Nmecha and what coaches can learn from him.

Scoring the winning goal in the U21 Euro Final is certainly a good way to make a name for yourself. In 20 Germany U21 appearances, Nmecha has netted 12 times. After scoring four goals in six games, Nmecha claimed the Alipay Top Scorer Award at the end of the U21 competition. Pair this with being named in the Team of the Tournament, alongside five other countrymen, it was undoubtedly a tournament to remember for Lukas Nmecha.

Scoring the winning goal on the international stage seems to come naturally to Nmecha. Although representing Germany U21 in this tournament, Nmecha had previously represented the England youth teams from U16 right through to the U21s. During the U19 European Championship in 2017, Nmecha scored the only goal of the game in the semi-final against the Czech Republic in the 93rd minute and followed this up by scoring the winner in the final against Portugal to win 2-1. This allowed England to win their first U19 European Championship since 1993.

After being born in Hamburg to a German mother and Nigerian father, the Nmecha family relocated to Manchester. Whilst representing his primary school in a football tournament aged nine, Nmecha was scouted by Manchester City. Lukas rose through the ranks from the foundation phase to youth development phase to professional development phase, before making his Premier League debut in April 2018 against West Ham at the age of 19. Following on from the three appearances he made for City’s first team during the 2017/18 season, Nmecha spent the next three seasons on loan at other clubs.

Nmecha has plied his trade on loan at Preston North End (2018/19), Wolfsburg (2019/20), Middlesbrough (2020) and more recently Anderlecht (2020/21), where he scored 21 goals in 41 appearances in league and cup competitions (18 in 37 league appearances). This was his best return across the past four seasons, playing a vital role as Anderlecht finished 4th in the Belgian First Division, finishing as their top scorer.

Nmecha’s move to Anderlecht may have come about due to the relationship he had built with former Manchester City captain and legend, Vincent Kompany, who had become the first team manager of Anderlecht in August 2020. Nmecha had previously spoken about advice Kompany had given him when they were both at City. "Kompany has told me what he doesn't like playing against. If I hold the ball up against him, I might lose the battle, so it's more about running in behind and using my pace.” Such a positive influence may have shaped Nmecha into the striker he has become in the last 12 months.

Nmecha is the older brother of fellow player Felix Nmecha (20), who also came through the Manchester City pathway. With both leaving Manchester City at the end of the 2020/21 season, they were reunited, both signing for Wolfsburg of the Bundesliga - Lukas’ former loan team from the 2019/20 season. It remains to be seen if he can set the league alight, much like he did during the European Championships.

During the U21 Euros, Nmecha displayed excellent goalscoring, which he had demonstrated for Anderlecht during the 2020/21 Belgian season. Although predominately right footed, Nmecha is known for being comfortable with both feet and for his first touch and finishing ability where he shows excellent confidence to shoot from anywhere. This is highlighted by his 15 shots across the six games he played (average of 2.5 shots per game), the joint highest shots for a striker during the competition. He scored four goals from these 15 shots (a goal every 3.75 shots), which saw him win the Top Scorer Award at the end of the tournament.

Nmecha has spoken about how he likes to use his pace to run at defenders. This is supported by his versatility on both feet, which allows him to shift the ball from his left to right foot with high technicality, whilst keeping the ball close to his body. He improvises and deceives well on the ball, allowing him to take players on 1v1.
He attempted 13 attacking 1v1s during the tournament, the 2nd highest for a striker in the tournament, behind only Ikone of France. Nmecha completed 10 of these take ons (77%), which was way above the centre forward average of 53%.

Nmecha times his runs and movements very well to find the space to receive and shoot – how can we develop this in our number nines?

We can set up sessions that place importance on the before, during and after of:

When you set up your activity, also challenge your players to try shooting with both feet – just like Nmecha. It may be difficult for some, but with time, they could find themselves being able to finish with either foot.