Finishing in the Euros: How do different techniques impact working with younger players?
Click here to join the England Football Learning group and chat with other members
OPTIONS
RELATED

Finishing in the Euros: How do different techniques impact working with younger players?

In this blog, Simon Houston, The FA’s game insights analyst and The FA’s youth coach developers Mark Kearney and Martin Dighton talk about some key insights from the Euros tournaments and how these can be applied to coaching sessions with young players.

How do we as coaches plan game-realistic finishing sessions?

We have previously picked out certain finishing headlines from the Euros this summer and discussed how they could be interpreted to influence practice design with younger players. Within this blog, we’ll dive into the techniques used by the scorers of open play goals and unpack how this may influence how you design sessions to improve your players’ ability in front of goal.

The types of finishing techniques are:

The graph below illustrates how common the different finish techniques were within the U21 Euros. We can see that 3 out of every 4 goals from open play were scored with an inside foot or strike. The remaining techniques used in the tournaments were relatively uncommon. 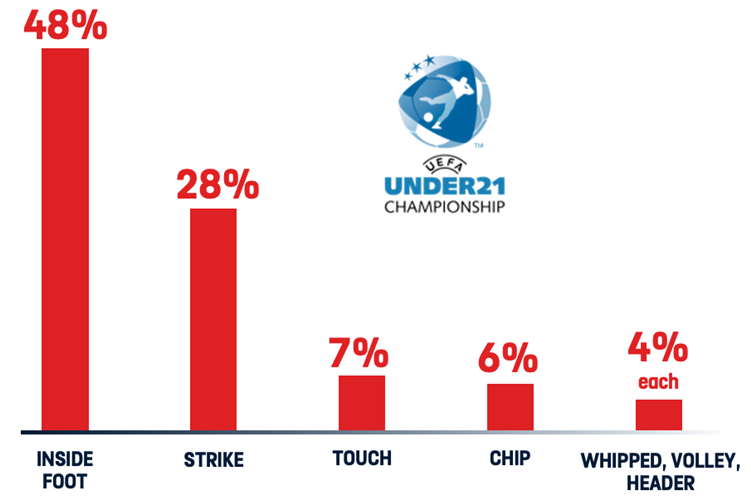 Like the U21 Euros, the Senior competition depicted in the graph below had the top two most common goal-scoring finishes as inside foot and strike finishes which combined for 59% of all open play goals scored.

As the top two were less prominent, header, volley and whipped techniques contributed to a significant proportion of the remaining goals. This data suggests a broader spread in the techniques used by senior goal scorers when compared to U21 goal scorers. 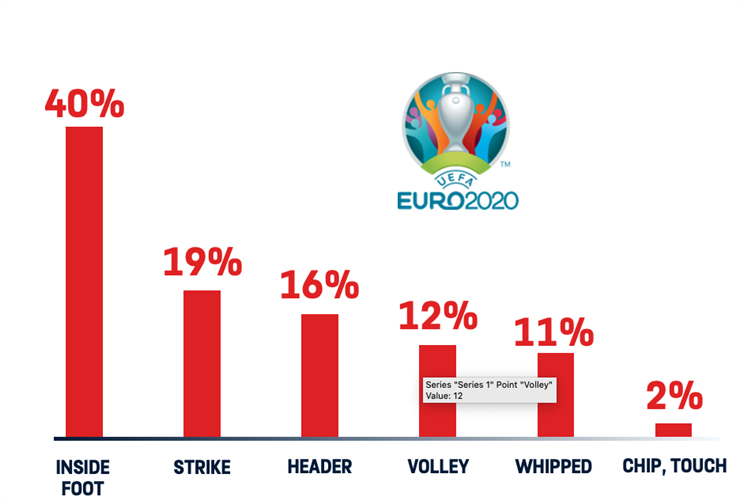 We also looked at how many touches were taken by the scoring player in the lead up to the goal. The graph below shows the proportion of goals that were 1 touch finishes, 2 touch finishes and finishes where a player took three or more touches to score.

In the Senior Euros, almost 6 out of every 10 goals were scored from a 1 touch finish (59%). We can also see that players scored when taking 3 or more touches only 22% of the time, which suggests having the time and space to execute this technique successfully is uncommon. In the U21 Euros, the data was comparable to this, with 1 touch finishing accounting for over half of the goals scored.

Mark Kearney and Martin Dighton have taken this data and considered how it might impact coaches designing practices for younger players. Their thoughts are summarised below:

To become an accomplished finisher, you need to master a variety of finishing techniques. Even if we take one of our techniques, such as inside foot, there are many different reasons to select this way of striking the ball, and many different outcomes. This links to the decision-making process within specific moments of the game. Psychological elements will also come into play; a player may make decisions based on what they are confident at doing rather than selecting the best technique for that moment. For this reason, the more situations we can make the players confident in, the more chance we have of scoring all types of goals.

The prominence of 1st-time finishes

Players need to know the why or reason behind choosing a specific technique. For some young players, first time finishing may feel uncomfortable and lead to a wider margin for error if the advice is always ‘take a touch’; however, these types of finishes are often just as uncomfortable for goalkeepers and defenders to react to. When the data is combined, how do we promote fast, instinctive 1 touch finishes while at the same time encouraging more relaxed, thoughtful inside foot finishes?

This data is a window into what’s happening at the top level of the game. Although younger players will aspire to play on the world stage, coaches must be experts in what the game demands of them right now. Is practicing first time finishes from crosses a valuable theme to direct focus, or is individual possession with a shot at the end more beneficial to encourage? Work out what challenges players are facing so that confidence in front of goal can be developed.


To view the practice Mark and Martin created from using these coaching implications watch this webinar or check out the whole 4-part webinar series here.

What do you think of this blog? Do you have any questions for Simon, Mark or Martin? Have you tried out their suggestions? Let us know in the comments below.