Fabio Viera: Euro U21 player of the tournament
Click here to join the England Football Learning group and chat with other members
OPTIONS
RELATED

Fabio Viera: Euro U21 player of the tournament

It may come as no surprise that Fabio Vieira was named the UEFA European U21 Player of the Tournament by UEFAs team of technical observers, the future looks very bright for this young Portuguese attacking midfielder.

Described by one of the observers as “A playmaker who creates a lot of chances. An excellent link between midfield and attack”, this was showcased through playing all six of the group and knockout stages, netting once for the runners up.

Vieira joined FC Porto at the age of 8, playing right through the academy pathway to make his first team debut in February 2019 at the age of 19. Before this, Vieira helped Porto to win the UEFA Youth League in the 18/19 season, scoring the opener in the final v Chelsea, a game Porto went on to win 3-1, the first time they had won the competition. He also helped the U19 win the domestic Júniores league title in the same season.

After 28 senior appearances and 9 goals for Porto B (the reserve side of Porto, playing in Liga Portugal 2, the 2nd tier of Portuguese football), Vieira made his debut for the Porto first team in June 2020, coming on as a 71st minute substitute in a Primeira Liga home game against C.S Marítimo. He scored his first league goal just a month later, in a 5-0 win v Belenenses SAD. He made 8 appearances during delayed 2019/20 season, as Porto were named Champions for the 29th time.

During the 2020/21 season, Fabio Vieira gained more first team experience for Porto. He made 19 league appearances, 3 Taça de Portugal appearances (as Porto won the tournament) and 6 UEFA Champions League appearances. On 27 October 2020, in only his second appearance in the UEFA Champions League, Vieira netted in the 2–0 win against Olympiacos F.C. in the group stage, as Porto reached the Quarterfinal stage of the competition. This shows how comfortable Vieira is on the big stage despite his youth.

On the International stage, Vieira has represented Portugal at U18 level (2 caps), U19 level (9 caps), U20 (4 caps) and U21 (13 caps and 6 goals). Vieira played all five matches as Portugal finished as runners up at the 2019 U19 European Championships, losing to Spain in the final. At the end of the tournament, he was named in the ‘Team of the Tournament’ alongside teammate Felix Correia. In November 2019, at the age of 19, Vieira earned his first cap for the U21 side. He scored and assisted on his 2nd appearance for the team in the U21 Euro Qualifiers, a vital part in Portugal’s journey to the 2021 Final.

After an excellent tournament and being named in the team of the tournament and the player of the tournament, here is hoping another excellent season for the youngster. With his current contract expiring in June 2022, it will be interesting to see if Vieira makes a big money move to one of the big 5 leagues after this season, and how soon it will be before he is a name on the team sheet for the Portugal Senior team.

After being named player of the tournament, one of the technical observers said that Vieira is “a playmaker who creates a lot of chances. An excellent link between midfield and attack”. This was showcased through Vieira being a vital cog in the Portuguese side, playing in all six of the group and knockout stages, netting once for the runners up. He displays excellent individual tactics, as he entices and commits opposition players with the way he is able to change the tempo of the play on the ball. Vieira had the fourth most amount of touches for a CAM during the tournament (averaged 78 per 90), the second highest touches in the attacking third (32 per 90) and the 4th highest touches in the opposition box (3 per 90). This shows he has a clear intention to skilfully penetrate through the opposition. 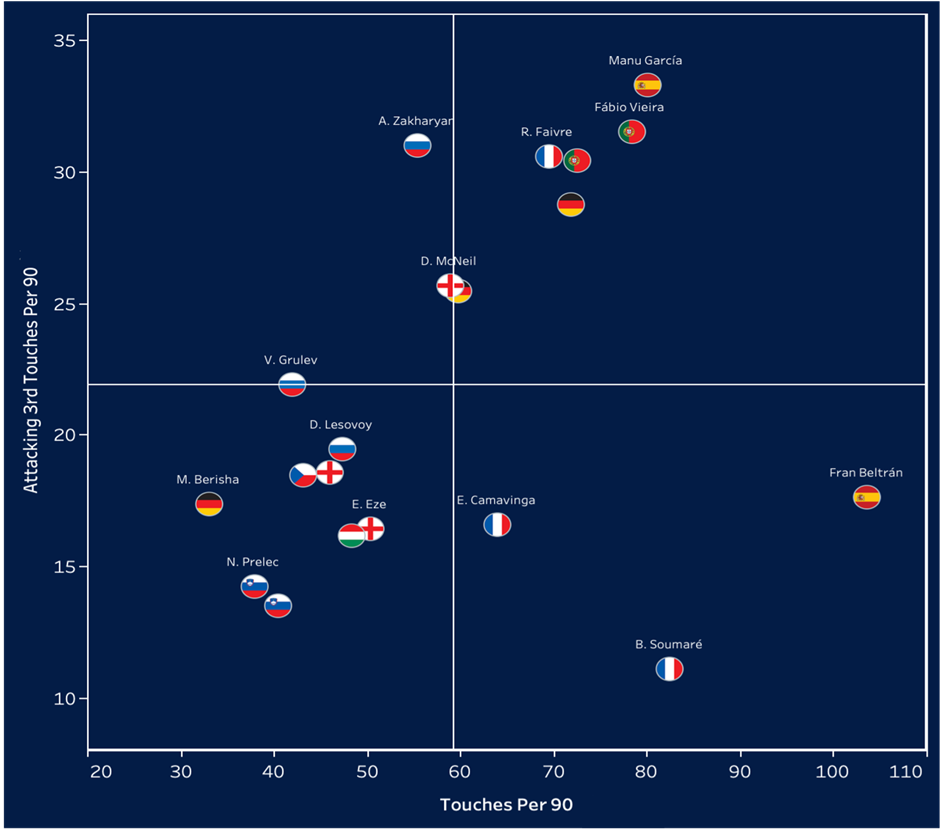 Throughout the tournament, Vieira used his body really well as a barrier to protect space and to protect the ball. He showcased excellent perceptual skills through his frequent and intelligent scanning before, during and after getting on the ball. This made it much harder for opposition players to tackle him and to make interceptions.

The Portugal Under 21 coach Rui Jorge described Vieira as a ‘very technically advanced player’ with a ‘great future ahead' following his inspiring Euro outing. He showed an excellent range and quality of receiving, dribbling and skilful passing techniques – Receiving to face up, dragging and tight ball control whilst moving with the ball and well-weighted, well-crafted passing. He was the master of deception especially whilst on the ball and when executing actions. He regularly played with timing to his advantage, mainly by being in control as the ball carrier and comfortable enticing opposition players.

Vieira is an excellent example of a ball carrier who is continually in control of the moment and in control of the game. It is really important that a coach values and promotes this. This highlights the importance of prioritising “staying on the ball” skills so that players can play on their terms, even under pressure. Teach the ball carrier to be able to shape the picture – and encourage them “not to play a bad picture”

Allow your players to explore how to see, create and use numerical overloads to gain advantage, just as Vieira does himself. Placing greater value on scanning both on and off the ball, before, during and after. This will allow players to better understand how to use their body as a barrier before and whilst receiving, shielding and dribbling. Help players explore their positioning between and behind opponent’s lines – further discovering cause and effect. Coach players to be able to “get faced up” when receiving

Help players explore a variety of through-passes, with varied techniques, varied timing and with different types of disguise. We need to greater prioritise 2 and 3 player connections, building relationships with individuals in the team on the pitch. Place greater value on ball control and getting the ball under your spell / putting into the best place for the next action.

To play like Vieira, your team need to be encouraged to be creative. That comes from the environment that you set. Players also need the opportunity to play in and around the box. Using small-sided games or focusing your practice designs on the final third can help.