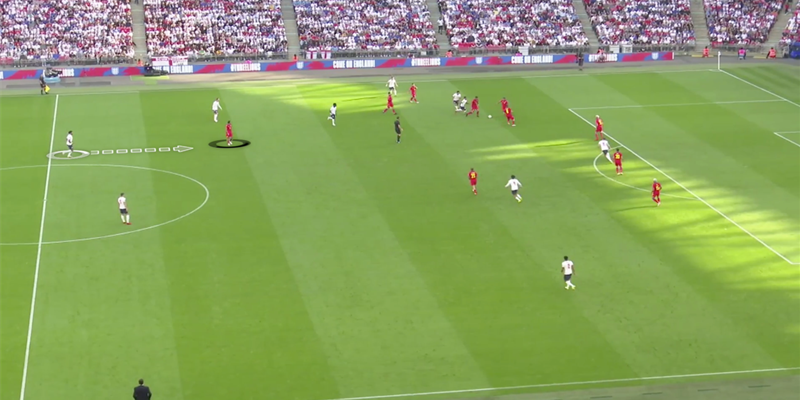 In this video FA Youth Coach Developer Ben Futcher talks us through a critical moment in the build up to England’s opening goal against Andorra from September’s World Cup Qualifier at Wembley.

As England are looking to create an attack Tyrone Mings focus is to provide security behind the ball in case the attack breaks down.  Constant scanning and reading of the game allows Mings to recognise Lingaard has taken a heavy touch and might lose possession of the ball.  However, he is one step ahead, as not only has he identified this, but he has also recognised the Andorra striker has dropped deep and may be able to receive the ball in a position to start a counter attack.

This situation provokes a decision of whether to hold his position on the halfway line, or step in on the striker to try and intercept.  Noticing the striker is looking at the ball he senses the opportunity to move forward and engage.  This is when his timing becomes crucial in order to read the pass and approach on the striker’s blind side to intercept.

Away from the ball his partnering centre back (Conor Coady) plays an important role in moving around to provide cover and balance in case Mings gets it wrong or makes a mistake, resulting in a potential counter attack.

Intercepting in such a controlled way allows England to sustain their attack and ultimately leads to a goal just 8 seconds later.

Having players capable of reading the game and having the skill set to step in and intercept in midfield areas is extremely valuable for teams who want to be aggressive and win the ball back quickly to sustain attacks.

If you liked this video please leave your thoughts or suggestions relating to the coaching considerations below.

To learn more about centre backs defending in midfield areas, check out this blog