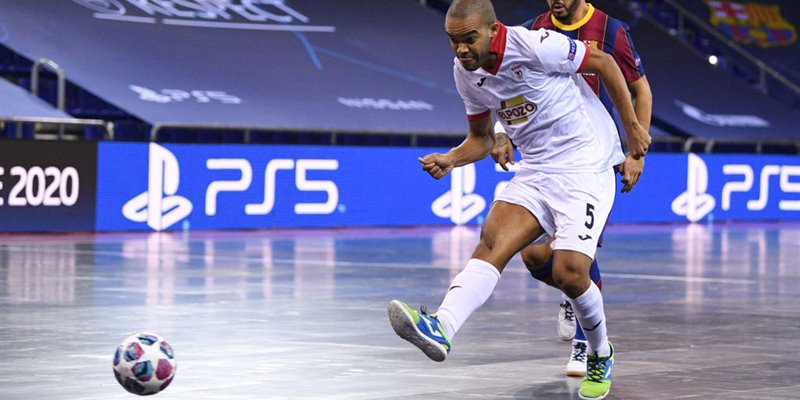 In this blog Luis Melville, UEFA B Futsal coach reflects on key aspects of the UEFA Futsal champions league and discusses what can be learned to influence practice design.

Recently, there was a rare opportunity to watch elite level club futsal on British TV when the UEFA Futsal champions league tournament was televised on BT Sport. The tournament pitched the best eight futsal club teams in Europe over six days in a knockout competition to decide Europe’s finest. Teams from Spain, Portugal, Russia, Slovenia and Kazakhstan took part.

It also was a chance to look at any trends in the competition, enhance learning about this fantastic sport and think about how might it influence or guide futsal specific session planning.

Goals: where were they scored on court?

32/37 goals (86%) were scored within the 10-metre zone to goal.
With smaller 3x2m goals it makes scoring harder and being within ten metres clearly increases your likelihood of creating goalscoring opportunities. Also, worth noting was 18 goals were scored within six metres. This trend replicates itself across top level futsal domestic leagues, so serious consideration should be given to factoring this into sessions that include finishing.

With what we saw in the Futsal champions league, being able to combine with a teammate to score and combine as a three will need to be included in practice sessions as players develop.  2v2 and 3v3 practices are going to be highly relevant to overall planning, but only once individuals can master the ball first.

One of the most noted characteristics of Futsal is the lack of time and space to carry out actions on the court. None more so than finishing and trying to score.

What we witnessed in Croatia was that 62% of all goals scored were done so with one touch. And a dramatic fall off in success happens after this.
Therefore, creating practices that can encourage one-touch during time/space constraints will be key. I would also add that different types of finishes, such as toe pokes, are highly efficient and disguise intention.

This is where set pieces and restarts are significant contributors to goals. There were four free kicks, four corners and eight kicks-ins which led to goals. So, planning a game-oriented session that allows for plenty of those situations to occur will give ample opportunity for this to happen. An example of this could be playing with two goals on half a court where every restart is a corner and is played to a conclusion as a game.

Anyways, we are only scratching the surface in looking at how the game can influence our practice design. But hopefully these are useful.

What do you think of these suggestions? What would some of your sessions look like to reflect the trends seen above? Let us know in the comments below.