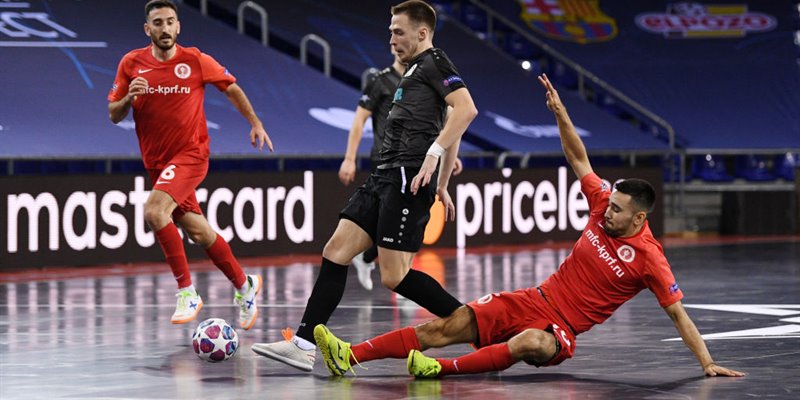 In this blog Pete Vallance, FA Futsal Coach Mentor and Worcester Futsal Club Head Coach, reflects on the 1v1 trends in the final stages of the UEFA Futsal Champions League.

During the recent UEFA Futsal Champions League Playoff Finals in Zadar there were many noticeable trends from many of the teams particularly in the area of playing 1v1’s. There is a common perception that 1v1 is just beating someone with a piece of skill and it involves just technical execution, however, within a high-level futsal context, there is more going on than meets the eye.

Most teams usually have a 1v1 specialist. For Sporting Lisbon it was Merlim. He could often be seen fronting up his defender on the left-hand side of the court while his other three teammates occupied attacking positions purposefully on the opposite side, allowing Merlim to exploit and execute a 1v1 situation against his opposing defender. This tactic is used on many occasions for various tactical outcomes including:

Depending on how the other team defend, it can also be used to draw over another defender to allow a switch to a teammate in more space.

My advice to coaches if they have a gifted 1v1 player is to maximise these court supremacy situations by creating ultimate space and total width for the 1v1, and helping the whole team be aware of each other’s super strengths on the court. Identifying players who have the capabilities, confidence and effectiveness to exploit 1v1 situations is one element. But developing the awareness of that player to see other forms of 1v1 and secondary gains is another deeper level of thinking.

Merlim was particularly effective in these games because he could play off both sides. We often saw him cutting inside to exploit the space his teammates have left him with a view to shoot or pass to the opposite winger or pivot by the far post. This would be off his right foot. However, if this became blocked he would then fake the pass or shot and move the ball onto his left foot committing the defender and drawing him out of the game. He was then able to shoot or pass with his left foot just as effectively. This made him very difficult to defend against.

There are many technical and tactical aspects to playing 1v1 particularly in the before, during & after phases.

The challenges we face...

The three areas below are some of the ways we as coaches can have an impact on educating players and coaches on this topic.

I would love to hear about how you help your players or if you have any comments about my blog. Let me know in the comments section below.