Passing in futsal: more than a technique 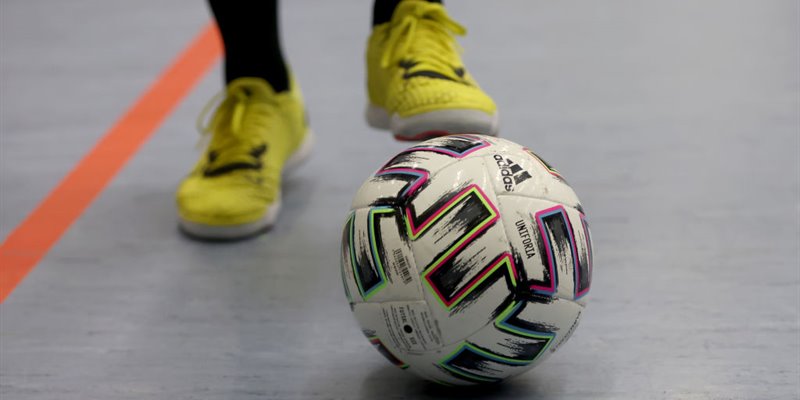 In this blog, Luis Mendonca, head coach of Cambridge Futsal Club discusses the tactical and technical elements of passing in futsal.

Futsal is all about battling for limited space. That's what players don't have - space. This means everything is quick because with less space, you have less time. With this in mind, the ability to move the ball efficiently (quickly and with quality) between players is one of the most important skills to make best use of the limited space.

I would define a pass as an offensive technical and tactical action between two players in which one player tries to make the ball reach the second by hitting it towards him/her.

Let me explain myself.

Technically we can pass the ball with all surfaces of the foot: inside, outside and the sole. The passes should be accurate and use an optimal weight on the ball to make it travel as quick as possible between A and B without compromising the quality of the control.

There are different types of passes that can be used in different ways to win the battle for space and time but to support the players in making accurate, well weighted passes it is paramount for us as coaches to make sure we observe, analyse and help the players with the detail. What allows the development of something is not just the practice itself, but also our intervention and feedback to the players.

In most cases, we will have to help players have their standing foot in line with the ball (not behind) and knee over it. This will usually be when facing our teammate and playing an inside of the foot pass to their feet. This will increase the chances of an ideal pass which should be firm, quick and sliding across the floor. Nothing can be more painful than watching a player who is in a very good position, losing all the positional advantage because they have to take 3 touches to control a bad pass or one that didn’t arrive in time.

In other situations, the players might be encouraged to face forwards but pass the ball sideways with the outside of the foot. This adds disguise and helps the passer to then accelerate into the space behind the flat-footed defender.

If we are looking for a “heel" pass (rolling the ball back), it is advisable for the player to use the furthest foot from the opposition in order to be able to shield the ball from potential interceptions. Exaggerating the disguise can be really important on this as it allows the receiver more time and space to perform their next action.

Another slightly different type of pass is the parallel pass. This is when a player is out wide and passes the ball down the line (parallel to the side line). It is met by a runner who has made an approaching diagonal move. This might also be known as a diagonal run for a straight pass.

In this case, the runner aims to meet the ball in a particular pocket of space so it is in that player’s interest to connect with it on the best possible angle, curving the run so they can face forward when receiving. For this to happen, the passer might have to slow down the pass by lifting the ball between knee and hip height.

Tactically we can say that a pass is another form of communication between players. It delivers a message. Therefore it is in our interest to educate our players to be able to deliver and read the messages that a pass brings.

For example, imagine a central back player passing to a winger. The simple difference of where or which foot the back player passes the ball to (nearest or furthest foot, or into the space in front of the receiver) might be the difference between “saying”: “careful, you are under pressure” or “you have space, so face forwards or travel forwards”.

At the same time, the passes allows players to manage the pace of the game as the pace of the ball contributes dramatically to the game management and when to accelerate it or when to slow it down.

Overall, a pass gives more or less time for the opposition to arrive near the ball, according to the attacking intentions, whether that be to attract the defenders or exploit space around them. Passes are an excellent way to move the opposition out of their previous positions and therefore dictate which spaces are available to exploit. Therefore passing is what gives the attacking team the “power” to control the game IF they manage the technical and tactical aspects of the pass.

Here are some useful videos, which highlight types of passing and how passing is used during a match:

If you have any questions about any of this, please comment below.