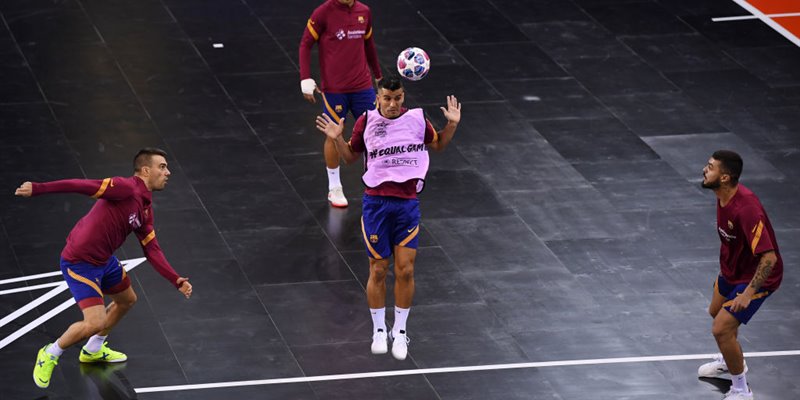 At the highest level of futsal, the physical, technical, and tactical differences  between the best sides in the world are minimal. However, at an elite level there are a few players who excel above and beyond their rivals. But why is that? Some experts and academics have been exploring the concept of Game Intelligence to find answers.

Game intelligence in invasion sports remains unclear and limited research exists, nonetheless players demonstrating game intelligence are frequently appreciated as having an ability to ‘read the game’, or ‘stay one step ahead of their opponent’.

Research by Lennartsson, Lindberg and Lidstrom entitled ‘Game Intelligence in Team Sports’ analyse this  quality that elite players have and refer to it as; ‘the ability to make quick, consistent and effective decisions.’

This applies to futsal and is an  important component to perform. Something former Spain and Barcelona legend Xavi  said about his own experiences was, “In futsal, you see whether a player is really talented… you notice the small details in quality, class and tactical understanding.”

In this blog, we will shine a spotlight on the Barcelona and Brazilian back man Marcenio to help us discover a little more about game intelligence in futsal.

The role of the back man or fix is regularly referred to as a play maker, the co-ordinator of a team’s attacking play, connecting with their wingers and pivot to increase the efficiency and effectiveness of their attacking threat.

Here I share a couple of observations on Marcenio to better understand his game intelligence and ‘why and how he does what he does?’ Specifically looking at what he does on and off the ball.

Perception-action is a cyclical process when an individual observes their environment and the events within that enable them to act. It is the co-ordination between what we see and what we do.

Perceiving to act off the ball

When I watch Marcenio I notice a player who moves with purpose. Off the ball he is continually scanning and checking his surroundings to gather information about the space and time available to him and his teammates and how it relates to the position of the opposition and the ball. As time and space reduces around the ball carrier Marcenio increases the subtlety at which he gathers and organises information to support his decision making as he makes himself available to support.

In a game of futsal, the environment is flooded with information presenting a significant challenge for most players to decipher ‘what matters most’. It is this perfect capability to absorb from the environment and attend to the most relevant information that elevates Marcenio above his peers. Marcenio acts with great clarity that not only enhances his own decision making but that of his teammates.

As Marcenio moves off the ball he assesses the pressure on the ball and the available space and time  to affect his direct opponent’s ability to press. For example, adopting court positions that force them  to make rash decisions on whether to press or cover. Small  changes in speed and direction compromise the body shape and balance of his marker, opening opportunities to receive possession.

Furthermore, Marcenio is accomplished in increasing the attacking threat of his team mates by disrupting the capabilities of their defensive markers. For example, when increased pressure is applied to the ball carrier Marcenio stays close and connected to the play utilising checking, screening and blocking movements to impact their ability to apply pressure. As pressure on the ball decreases, his movement becomes more aggressive advancing higher up the court leaving space for the ball carrier to exploit passing lines that appear.

Perceiving to act on the ball

As is with his movement off the ball, Marcenio is regularly extracting information from the environment when on the ball. A constant awareness of the available time and space around him and that of his teammates coupled with a proficient body shape when manipulating the ball increases of the likelihood of being effective in pressurised situations.

Detail allows Marcenio to flourish.  An exquisite first touch and precise ball manipulation affords him extra time to gather information, almost allowing him to pause momentarily to explore superior options . This technical detail is supported by a body shape that is constantly picking up cues in relation to the threats and opportunities around him that significantly increase his ability to not only play, but play forward. Lastly, an extensive range of passing techniques enables constant forward play for this team. Whether, it is passing with the outstep (as naturally as the instep) or playing reverse passes into the pivot, Marcenio is a magician of forward-thinking futsal.

Perception action is a simultaneous process of acquiring information and acting upon that information, learning from the decisions and execution of those decisions as we go. Marcenio has honed this skill over many years and offers a glimpse into why and how the very best do what they do.

As Andreu Enrich writes in his book 50 tips from Intelligent Players, ‘Intelligent players prevail over others. Intelligent players are able to rule the game according to their will while conditioning the opponent and making decisions that constantly improve the game, bringing them and their teams closer to the final victory.’

This blog is not an attempt to provide clarity on the concept of game intelligence but simply appreciate a player who remains one step ahead of the game even when the game is full of the best futsal players in the world.

Here is some footage of Marcenio in action...

Let us know in the comments below.