Ages ago my son was playing a game on his pad called Soccer Hero. It is kind of like playing football in levels. The team he plays for and I coach where getting good a keeping the ball but needed work on creating chances so I thought about creating Soccer Hero into a game they could play. I had seen similar things to this before but never including lives and the possibility of going out. Of the 12 in the team only 3 had played Soccer Hero (don't like the name but it is catchier than Football Hero) so we explained how the game works.

The objective is to improve the Speed of Passing. The penetration of the team. The risk taking. The movement. The awareness.

And so far it has worked. The team are passing to each other quicker and moving forward to create chances. It has even helped to improved the attitude of the players. Knowing they are playing this at the end has meant they work hard at the previous tasks and listen to gain as much time at the end to play this.

Anywhere between 7 and 12 is good.

As I wrote earlier I am sure someone else will have thought of this before and may have even put this on here but I thought it would be worth putting on here for anyone else who may find it useful. 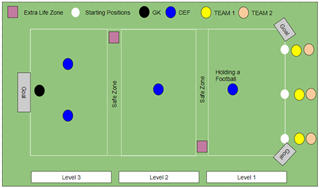