My start to Powerchair Football 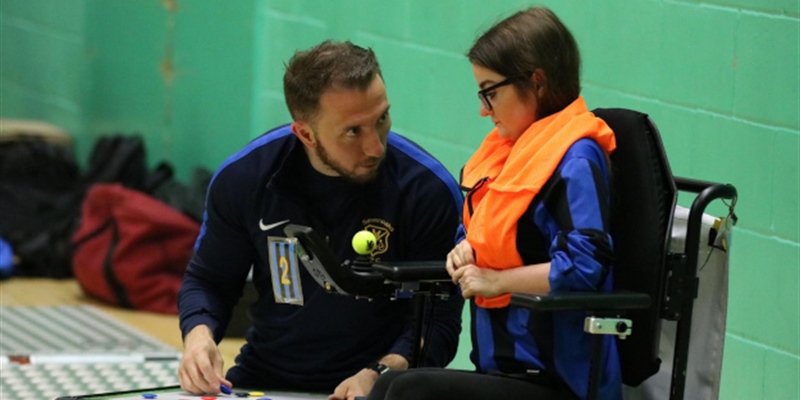 Adam is the national development manager for the Wheelchair Football Association, a disability delivery partner for The FA and the lead organisation for powerchair football in England.

He has been involved in powerchair football for 10 years and coached at a variety of grassroots levels before that. He coaches Sevenoaks Powerchair Football Club, based in Kent, working with players aged 10-30, all of whom have high levels of physical impairment.

My journey into powerchair football began at a new job, working in a special needs school.

Powerchair football was an after-school activity for the students, all of whom used powerchairs daily. My background was running game football, working with u6’s & 7’s through to players at county FA development centres and county level women’s football.

Like most other coaches thrust into coaching disability football, I had no prior experience of the powerchair format. I knew about the STEP principle (Space, Task, Equipment, People) as an inclusion aid, but that was about it!

However, like any inexperienced coach working in any format of football, you learn on the job!

Powerchair football is a 4v4, indoor format of the game, played using specially designed electric powered wheelchairs. An attachment on the front of the chair acts as the player's feet and this is used to dribble, pass and shoot the ball. The ball itself is 33cm in diameter and is the equivalent of a size 9 ball – you wouldn’t want to head it!

In addition to this, a key difference is that powerchair football is a two-dimensional form of football – due to the player's disabilities and as a safety measure, the ball stays on the floor.

Reading these differences, you may think "this is really different" and in some instances, you’d be correct. But the principles of football and coaching are exactly the same!

Basic attacking principles such as making the pitch big, finding space, and penetration were completely transferrable. Likewise, defensive principles on being compact and denying space also made my understanding from the running game to powerchair, much easier.

Some techniques are similar – dribbling involves lots of small touches, keeping the ball close to your chair whereas others, such as attempting 180-degree spins on their chair to change the direction of a pass are not!

In instances such as those, I attempted to learn about them via simply watching players and asking the players how they performed them. As a non-wheelchair user, I know demonstrations are not going to be easy (though practicing in the chairs is great fun!), so I tend to leave those to players when required.

It became clear to me early on that whilst I needed to learn about the game, I could still deliver good sessions for players. My coaching sessions were based on developing techniques and game-related activities. My focus was on ensuring they were fun and enjoyable, whilst trying to challenge player thinking and problem solve. This is still fundamental to me today, years later.

To help build sessions, I took examples of running game sessions and modified them to make them more powerchair specific. Techniques, skills and game challenges from my Level 1 course and youth modules were ideal and to this day, I look to the running game for sessions and small-sided games to see whether they can be modified.

So, whilst moving into disability football can be potentially daunting, it really is no different from running game football! With increasing opportunities, it is a great time to get involved and the impact coaches can have on players' lives is huge.

Check out the Powerchair activity channel within the FA Football Your Way hub for session ideas or the Wheelchair Football Association website for more information on the game and the WFA coaching powerchair footballer course.

If you have any questions about wheelchair football, please post them in the comments section below.