England reach back to back world cup finals 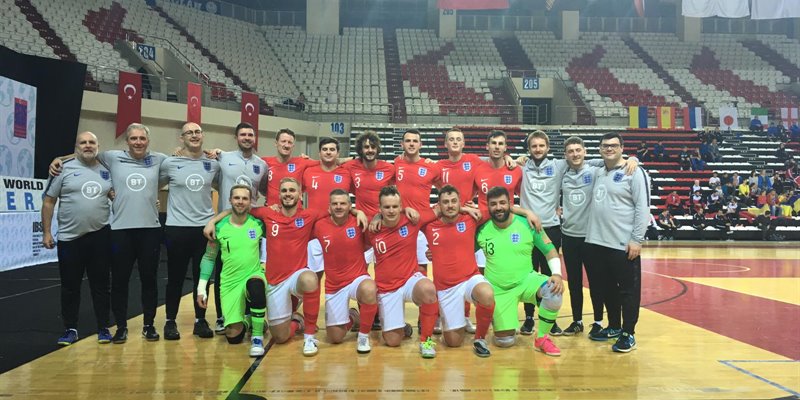 Is this fact or fiction? England has a men’s team that has reached back-to-back world cup finals.

We have a team that are ranked 2nd in the world.

We have reached the semi-finals of the last five major tournaments.

We have come third in the last two European championships.

We have a captain that received an MBE for his services to football in May 2020, and he also has over 130 caps for his country

The squad is probably England’s most consistent team ever.

All of the above are facts are correct and it has been an absolute honour and a privilege to work with the partially sighted England squad.

To be recognised as partially sighted (PS) your eyesight needs to be categorised as being a B2 or B3 player. Players in the blind squad will be B1. There are strict rules around this, and players are assessed and tested every two to three years depending upon their eyesight condition

Futsal is the perfect format as seeing things at a distance (10 metres +) is difficult for most players. By playing indoors we can also control the lighting conditions to help the players.

The squad has been in existence for over 20 years and a consistent player throughout this period has been Steve Daley. He has been captain throughout this time and has been instrumental in the recent success. After the most recent world Cup held in Turkey in 2019 Steve hung up his playing boots and took over my role as head coach.

During the last 10 years Steve worked tirelessly to gain his coaching badges and is the holder of the Football and Futsal UEFA B awards and through his work coaching in the academy at Burnley gained the Advanced Youth Award so he is now well placed to take over the team and hopefully win a world or European gold medal.

The nemisis for the squad is Ukraine……they have been the dominant country for the last ten years. Other countries have pushed them hard with Spain and Russia ensuring that they haven’t had everything their own way, however we have steadily developed over the past eight years and now we are in a position where we are 2nd in the world.

This is quite an achievement in that, Ukraine, Spain, Russia, France , Italy, are all key futsal nations and that countries such as Turkey and Japan have much larger budgets in partially sighted futsal than ourselves.

The success over the last four tournaments is down to a number of reasons.

From the players perspective they do not get paid for playing their sport. PS Futsal is not a Paralympic sport so funding is not available to them in the same way as other athletes might receive support in swimming and cycling.

Most of the squad has stayed together for ten years, players that made their debuts as teenagers are now young men who have got married and have children. The squad is a story of developing much more than footballers. They are a band of brothers

This consistency and the addition of more young players allows the group to gain experiences of competing in major tournaments and gaining experiences. Winning, losing and travelling together builds up a huge number of inspirational experiences for the players. Cap accumulation has been critical.

From a GK perspective we utilised the England GK small-sided pathway. We had access to the very best GKs in England to be in goals and in turn for Dylan Malpass this provided more opportunities to get into the mainstream England futsal team having played in numerous top-level tournaments for the blind and PS squad prior to a mainstream debut.

We now out play the traditional futsal nations. We can still outrun teams and in addition to this technically we have developed individuals that are outstanding players in and out of possession with over half the squad now training and playing in the National fully sighted futsal league.

To get to this level the players have committed their time and the coaches have developed their skills to help the players both technically and tactically.

A key way to help the players has been using matches against fully sighted teams at training camps. The England U19 squad would pass and move the ball quicker than Spain PS squad, other teams might be chosen to play us that were more physical than Ukraine

There has been a consistency in the coaching staff, most of the staff have been on the same journey with the players. This has been useful to see the players journey but also supporting each other to get better and improve.

Having specialists to support the players has been key. Marc Forrest has a keen eye for futsal detail and now has international experience to add to his C.V. Steve Tones has been around the squad for ten years and as well as being a specialist around how the players learn has been a mentor to the coaching staff to help them improve and develop.

From a goalkeeping perspective we hooked into the mainstream England programme, this allowed us to use the expertise of the best futsal GK coaches in England in Andy Redding and Tony Elliot .

So the challenge going forwards……can England go one better and win Gold?

There will be a World Games in Birmingham in 2023 ……maybe football could be coming home.