Nicolo Rovella: The future of Italy’s midfield
Click here to join the England Football Learning group and chat with other members
OPTIONS
RELATED 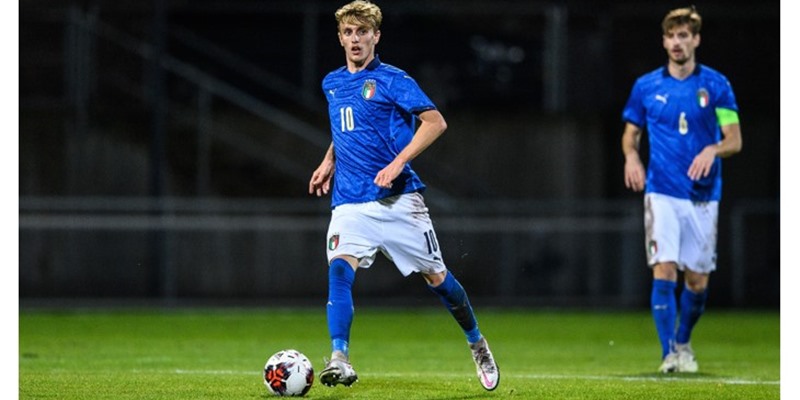 In this blog, the FA’s game insight analyst, Katie Sorenson talks about Italy’s new gem in midfield and highlights key areas of his game that coaches could develop with their players.

Despite only playing three games during the group stage and knockout stages of the tournament, Rovella left a lasting impression. At only 19 years of age, Rovella was one of the youngest central midfielders in the competition. He was able to showcase technical ability that showed him to be wise beyond his years, and definitely, a central midfield player Italy can utilise internationally for years to come

Having started his youth career at grassroots club ASD Alcione, Rovella moved to Serie A club Genoa at the age of 16. He made his professional debut with Genoa in a 3–2 Coppa Italia win over Ascoli on 3 December 2019. He made his Serie A debut only 3 weeks later, aged 18, coming on as a substitute in the league against Inter Milan away from home.

After 11 first team appearances between 2019 and 2021, this was enough to gain the attention of Italian giants Juventus, who announced the signing of Rovella on a three-and-a-half-year deal for just over £16 million in January 2021. As part of the deal, he went back to Genoa for the remainder of the 2020/21 season and made a further 11 appearances. Rovella will remain on loan at Genoa for the 2021/22 season to maximise his opportunities of game time and to allow him to continue to develop as a central midfielder. If carefully managed, Rovella could emulate current Euro 2020 champion Azzurri midfielders like Verratti and Jorginho. He is a talented, young player that seems destined to play at the top, even though he is still only 19.
Rovella has represented Italy National Team since making his U17 debut in 2017, going right through the National pathway playing for the U17 (6 caps), U18 (8 caps), U19 (10 caps) and then the U21 (five caps). Rovella made his debut with for the U21s in the qualification stage of the 2020 European Championship, in a game that Italy won 2–1 against Iceland.

Although more recently Rovella has played in the deep lying playmaker role (#4/CDM), he has also operated further forward in the eight or ten role, earlier on in his development in the youth system at Genoa. The opportunity for him to play and experience different areas of the central midfield, will have made him a more well-rounded player.

Mostly known for his work as a defensive midfielder, Rovella enjoys playing in a deep-lying playmaker role from where he can help build attacks. He has already been able to show his passing abilities along with his great vision when carrying out the ball from the back. He is able to pick a pass, even when under substantial pressure from opposition players.

During the U21 Championships, Rovella completed 87% of his passes (above the 84% average for CDMs and CMs who had played three or more games during the tournament) and had the seventh most amount of touches on the ball for a central midfielder (86 touches per game). Rovella was always keen to get on the ball when Italy were building from deep, looking to join the team together with his passing and receiving ability.  His ability to pass between the lines and find players in the half space is evident. With more playing time and experience, he will only continue to improve.

Out of possession, his aggressiveness and pace are great attributes to have when defending and when on the transition to attack. Rovella performed very well throughout the tournament when having to cover for his teammates, making vital interceptions and tackles displaying excellent anticipation skills. Per 90 minutes, Rovella made 4.20 tackles, recoveries and interceptions in the defensive third (average for CM/CDM is 3.55 per 90). This displays his defensive abilities out of possession, as well as his passing and receiving skills in possession.

The youthfulness of Rovella demonstrates the importance of getting our young players on the ball as much as possible and as early as possible in their development. One of our current priorities is receiving under pressure and Rovella has a great ability to do this and the ability to find space to relieve the pressure when receiving (highlighting the importance of scanning space and players in close proximity when getting on the ball). His before, during and after actions when receiving are as follows:

He moves intelligently and shapes his body to receive and scans well to inform his next actions. He is also willing, and able, to travel with the ball or turn quickly away from pressure if he needs to. Therefore, highlighting the importance of implementing some smaller sized opposed practices to challenge players’ receiving skills and their decision making on the ball. This will also help with their problem-solving skills.

Let us know below.