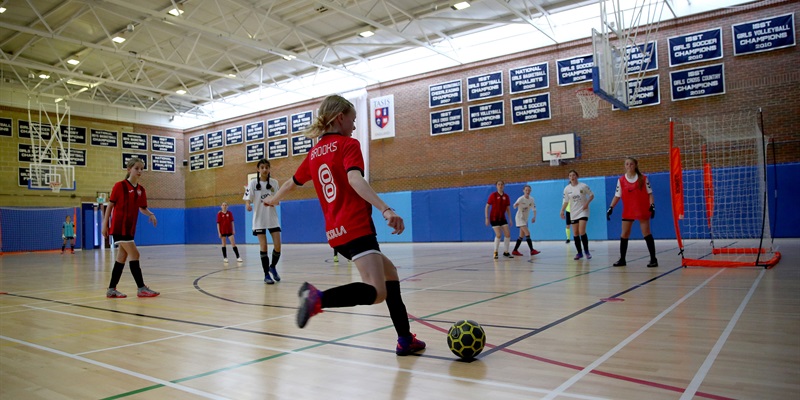 In this blog Bruce Vause, FA futsal mentor and experienced secondary school PE teacher talks about the opportunities futsal can bring for teachers and schools.

As educators of physical education we have an opportunity to expose youngsters to futsal, drive participation and inspire future players, coaches and officials. In order to do this effectively we must aim to make sure that the delivery of the game is effective and of a high quality. The constraints and returns of playing futsal are important to ensure youngsters are getting consistent messages.

In terms of constraints, schools must apply the following ‘non-negotiables’ to futsal activities:

The goal: a futsal goal is a 3 x 2 m goal, the smaller, narrower goal makes it harder to score from range which means that players need to be better in possession to create scoring opportunities.

Play to lines: the game has clear court boundaries and, in a school setting often netball lines work well to increase the skill and cognitive demands. Playing to lines ensures players have to be in control of the ball at all times to stop it going out of play.

The ball: a futsal ball travels faster and stays in play longer than a football. The futsal ball doesn’t bounce as high as a football, so it spends more time on the floor and is, therefore, easier to control which leads to a higher number of passes in games.

The hard, flat surface: on a hard, flat surface the ball will travel faster meaning decision making is challenged more. Additionally, due to the increased speed of the game, players develop their fitness levels quickly and have to control their emotions in demanding situations.

The laws: games should be played to the laws. Two futsal laws I have noticed make a difference to the players are that they can’t play back to the GK once they have played it out. This means players must improve on playing out of pressure. The other one is taking kick ins with four seconds, which keeps the intensity, gets them thinking ahead and playing with control.

Schools and physical education departments can benefit by offering and delivering futsal related activities. Most secondary schools have a sports hall or MUGA (Multi-use game area) which are ideal surfaces for the game. Equally many schools have access to handball/futsal goals. If schools are starting from nothing then from an equipment point of view, it is cheap to begin. A set of aluminium futsal goals can be purchased from around £650, or alternatively portable handball goals which are can be stored and assembled in minutes start at around £200.

My experiences of futsal in an educational setting have shown high levels of student engagement, with the game proving to be a popular and inclusive football activity. This is particularly important in this era of education with schools now actively tracking numbers and attendance of co-curricular activities.

Traditionally the school sport calendar involves a football season break over the winter months, which is an ideal time to offer futsal as an alternative activity. This period is also an opportunity to organise inter-school fixtures and competitions which are growing in popularity. The new Ofsted framework looks at a school’s intent to provide for the personal development of all pupils, and I have found that the game can be used to develop social and cultural capital. For example, I have led futsal tours to Spain and in that residential setting students have enhanced skills such as confidence and resilience. Such trips also help to enhance cultural awareness and show the importance of diversity.

Finally, when considering including futsal in the key stage three and/or key stage four curriculum it is worth noting that the sport is now a DfE approved activity. In September 2019, the department for education added futsal to an approved activity list for GCSE, AS and A-Level PE. This opens the door to these qualifications for youngsters across the country, who are dedicated to futsal, but who may not have considered P.E as an option.

Introducing futsal has improved the lives of young people in my school, and by working to create opportunities and a network of support for students we have improved their life chances. In recent times futsal has developed students who have signed as scholars with premier league football academies, several students are now playing in BUCS competitions as they continue their learning in Higher Education. Several students have also played in the FA national futsal series and one student has played international futsal for England at U19 level.

I have found the following five steps useful in terms of gradually developing and improving futsal provision in schools:

If you have any questions or need help getting started, please post some comments or questions below.